In the UK today knife crime is on the increase. This is a serious and worrying concern and the impact can be devastating to both the victim and perpetrator. Possession of a knife is illegal but the threat of enforcement doesn’t deter young people from carrying a knife, trying to purchase a knife, or threatening others with a knife.

We believe protecting young people from knife crime either as victims or perpetrators of knife crime has never been more important. We are therefore planning to arrange an invitation only government, and public sector focussed anti knife symposium in Leeds in early 2018. The symposium is aimed at understanding and creating a cohesive multi agency programme to tackle the issue.

The nature and extent of knife crime varies across England and Wales. According to a BBC investigation a knife or blade was used in a crime every 16 minutes on average last year. The police recorded 34,703 offences involving a knife or sharp instrument in 2016, a 20% increase from 2015 and the highest number since March 2011. The Crime Survey for England and Wales (CSEW) reported over 18,000 proven offences for possession of a knife or offensive weapon in 2016. With records showing there were 2,300 victims of knife crime aged 18 or younger last year – a rise of 45% over three years, in England and Wales.

London recorded the highest rate of offences involving a knife in 2016. In March 2017, monthly knife crime figures exceeded 1,200 for the first time since November 2011 – CSEW

There were 644 knife crimes recorded in Leeds during the first eight months of 2016/17 – only 10 fewer than the whole of the previous year – Yorkshire Post.

The chart below uses data drawn from the ONS on knife crime reported to the police. It shows the total for all violent crimes where knives or other sharp instruments were used. When broken down individually into the various crime categories the data clearly indicates that the gradual change in knife offences is returning to levels seen back in 2011, the earliest point for which comparable data is available. 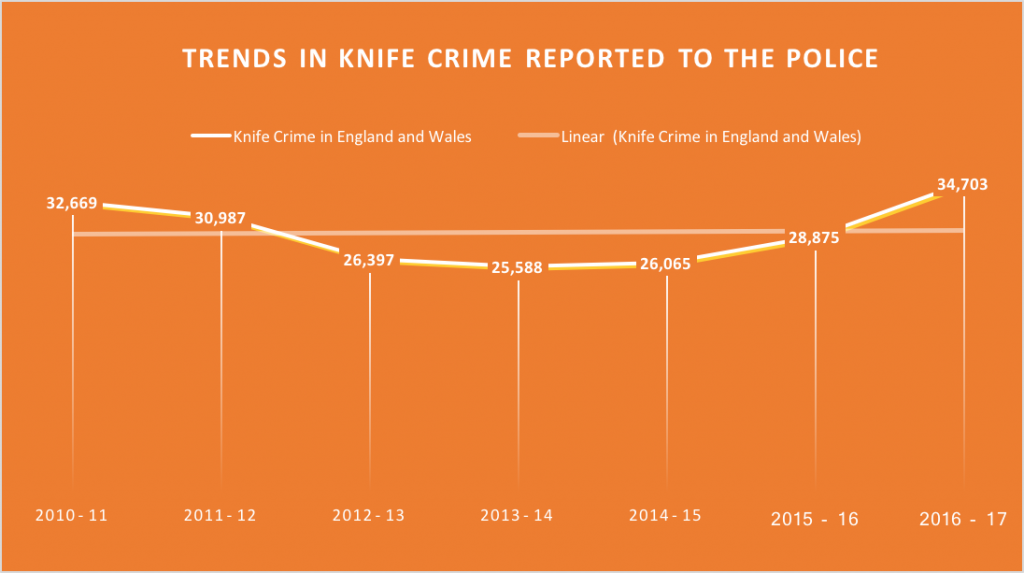 Why do people carry knives? 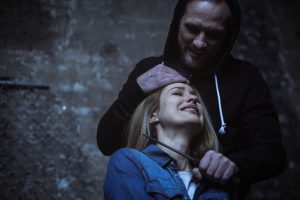 There are many reasons why people carry knives, and they rarely even think about the potential for using the knife, and many who have used the knife in a violent situation have done so on the spur of, and heat of the moment, and regretted it.

There is a double tragedy to consider in many cases, where a young person kills another, and wrecks their own live, that of their families, as well as taking the life of the victim, and devastating the victim’s family, which in turn can have a profound emotional and psychological issues leading to fear, insecurity, confusion and uncertainty.

People who do carry and / or use knives do so for a variety of reasons. Drivers and negative influences include:

There have been a number of recent initiatives by the Home Office to tackle knife crime. These include:

According to the Home Office, knife crime remains below levels in 2010 but it recognises there is more to be done. This is echoed by us as we recognise that knife crime needs to be managed holistically and much work is needed to address the knife problem and reduce the number of deaths and serious injuries caused by knife crime.

We believe that having a strong programme will be crucial to in tackling knife crime. We know that young people who harm others as perpetrators of knife crime have often been victims themselves. We need to go beyond telling them about the dangers of carry a weapon and focus upon helping them understand the consequences of their actions not just to themselves but also to their victims and the wider community.

Our anti knife symposium will be aimed at understanding and creating a cohesive multi agency programme to tackle the issue. We will be involving representatives from Policing, Government, Education, Retail, who will contribute to this symposium, together with representatives from the academic world and celebrities who are passionate about tackling the issue.

The output from the symposium will be a programme designed to tackle the issue from all angles:

This looks at preventing offences from happening in the first place. This will be achieved through education, training, reaching schools, changing the system, looking at punishment, and restorative justice.

As part of this strand we are looking to launch an engaging Military service style programme for young offenders where they will learn to use knives responsibly through field craft and survival training and military close quarter combat training. Following this programme, candidates will obtain a Level 2, or three certificate which encompasses teambuilding skills, leadership skills, critical life skills, English writing and speaking skills, and personal safety and security. The qualifications will be equivalent to GCSE and A-level respectively. Given that the profile of many offenders is a lack of performance and achievement in mainstream education, we feel that this is a powerful initiative.

Knife specific self defence training for key workers at risk, such as teachers, youth workers and so on…

Looking at providing support for victims and families who have been touched by knife crime. Putting victims and offenders together to promote forgiveness, understanding and restorative justice. This will bring together much broader benefits to health and well-being associated with tackling violence and promoting safer communities.

If you are interested in attending or contributing to the symposium please email events@combat-academy.co.uk to register your interest.