The concept of self defence is in the modern world is an emotive subject, with many people perceiving that that violent crime is becoming more common. There are also new emerging threats within the field of terrorism that demonstrates that this threat does not just fall within the domain of the police and the military, but that ordinary people are also at risk as shown by the callous attacks in recent months in London and Manchester. The headlines over the last few days on acid attacks being on the increase as well as stalking victims being left at risk due to the failings by the police really does paint a bleak picture, particularly for women.

For those of you have suffered an ordeal – be it rape, sexual harrassment, domestic violence, terrorism related, hate crime or stalking either physically or via though new technologies – know that the aftermath of the crime can sometimes be worse than the crime itself. It can have a devastating impact on you and your loved ones. Nothing prepares you for the pain, the shock, the denial and inability to act!

For those of you who have never been in an attack, how would you react – would you fight or freeze? It’s one of those questions where you would automatically say fight till your last breadth rather than give up. But only if faced with the stark reality of an attack will you truly know how you would react in that situation. For many women decisions are made on a second by second basis. Struggling, resistance and reasoning only get you so far and the primary concern should always be about taking control and minimising the damage done to you.

Warning: This scenario is graphic, and describes the harsh reality of violence. Whilst we do not aim to shock, we do aim to prepare people for reality, which can be disturbing. 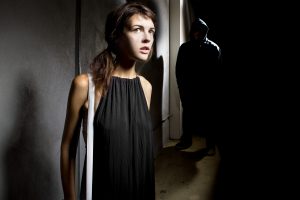 You are walking home and an get the feeling you are being followed. You turn round and see the dark shadow of a large male, duck into an alley. You unplug your headphones and start to feel extremely nervous and unsure about what to do. Suddenly the male darts out, grabs hold of you with tremendous strength and drags you into the alley. With a hand rammed across your mouth, you try to scream and you lash out – seemingly unable to generate much force compared to the sheer strength of the man attacking you. You become aware of the smell of his putrid breath as he tells you not to f***ing struggle. You attempt to knee him in the testicles, but because of your lack of balance and position you knee his leg. Suddenly you hear a loud bang and everything turns green with an odd taste of metal in your mouth, you are losing consciousness when another noise erupts as the man’s fist cannons into your face for a second time. You vaguely remember thinking ‘why is this happening to me, am I dreaming’. You realise that there are bits in your mouth and warm metallic liquid, your teeth are shattered and you are pinned to the floor – then nothing.

With 2017 being designated by the European Commission as the year dedicated to combating violence against women, learning self defence skills and undertaking personal security and safety training has therefore never been more important.

This unfortunately, is the reality that we want to empower you to deal with and survive. Understanding that personal security, personal safety and self defence are three very different knowledge bases of equal importance.

In the real world victims are selected because they are small, weak or isolated, or perceived as such compared to the ability of the attacker. When an attack happens, first and foremost you need to survive the initial onslaught and avoid taking significant damage. Staying alive and undamaged will give you valuable time to make a noise, shout out, raise attention and potentially get the attacker to abort the attack. Being skilled and effective at avoiding blows and punches will also buy you time. Going for an attack to one of the most devastating targets such as the eyes may be a viable option and far more reliable then attempting to knee a male attacker in the testicles.

To discover more techniques and strategies that could save your life, attend our Self Defence and Personal Safety Course for Women.

The course is hard-hitting and based around reality, catering for all women regardless of age and physical ability. The course is designed to impart a level of empowerment, competence and confidence to help women make the right decisions in the worst scenarios.

To book on our next course or find out more information

If you have been affected by the subject in this article, please email victim.support@combat-academy.co.uk